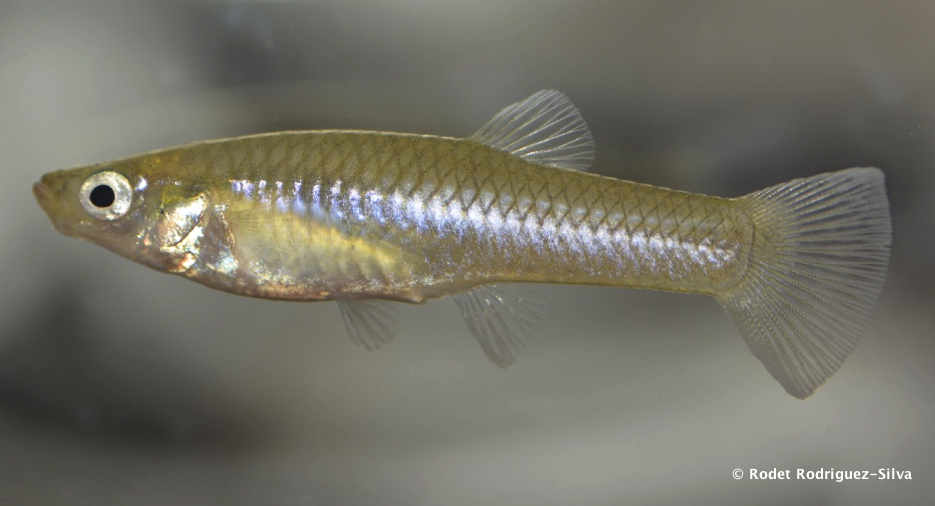 Haitian fauna has just gained a member! As of now, Lake Miragoâne contains no less than nine species of fish belonging to the Limia genus. This discovery, which was recently published in the journal Zootaxa, is the fruit of a scientific collaboration involving three Caribbean students: Rodet Rodriguez-Silva (Cuba), Patricia Torres-Pineda (Dominican Republic), and James Josaphat (Haiti). The high-achieving trio is already preparing a second article.

Located in the centre of the Caribbean, the island of Hispaniola is divided between the Haitian Republic to the west, and the Dominican Republic to the east. With 18 endemic Limia species, compared to only one in Cuba, Jamaica or Grand Cayman, Hispaniola is considered the major endemic site for fish in this unusual species. One of its major distinguishing features is that Limia are ovoviviparous fish, which mean the eggs hatch inside the mother’s body, who then gives birth to fully-formed offspring. Of the 18 Limia species identified so far, nine are endemic to Lake Miragoâne. The lake is home to a particularly large number of endemic ovoviviparous fish species, making it a site of major significance for the study of the origins and evolution of freshwater fish in the Caribbean islands. Despite its rich potential, no scientific study had examined the ichtyological fauna of Lake Miragoâne since the 1980s. It was high time these three Caribbean students joined forces!

The project came to fruition during the fourth edition of the Caribaea Initiative Research & Conservation Conference (CIRCC), organised by the non-profit organisation Caribaea Initiative in the Dominican Republic, where all the authors met up to present their studies. This annual meeting is an ideal setting for networking and development of new collaborations spanning the Caribbean islands. 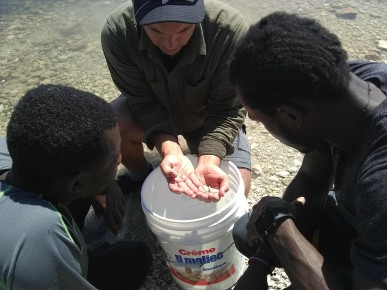 A month later, and with the enthusiastic support of Caribaea Initiative, the three students organised a field trip to Lake Miragoâne, where they had happy fishing. In their nets, a small fish caught their attention because of its particularly well-developed lower jaw. A full morphological analysis revealed what the students first suspected: it was a previously unknown species. Inspired by its physiognomy, they named it Limia mandibularis, from the Latin mandibular meaning “jaw”. This discovery was all the more gratifying for these students setting out on their scientific careers as descriptions of new vertebrates are infrequent, particularly in a country classed as one of the poorest in the world.

The story does not end there. Our three students are preparing another article on the fish in Lake Miragoâne and the threats to their diversity. The studies that James Josaphat has been developing recently as part of his PhD thesis should also allow better management and conservation of fish in the Limia genus in freshwater courses in Haiti.

Rodet Rodriguez-Silva is scheduled to finish his PhD next year at the University of Oklahoma where he is working under the direction of Dr. Ingo Schlupp. His research project is focused on the ecological mechanisms influencing speciation in ovoviviparous fish is the Greater Antilles. Caribaea Initiative has provided part of his research funding since 2019.

Patricia Torres-Pineda is a research assistant and curator of the fish collection at the “Prof. Eugenio de Jesús Marcano” National Museum of Natural History in the Dominican Republic. At the start of the next academic year, Patricia will enrol in a Master’s in ecology and evolutionary biology at the University of Michigan. Patricia is particularly interested in the ecology of freshwater fish.

Caribaea Initiative student fellowship program is intended to support promising young people from the Caribbean who are motivated in becoming future regional experts in key disciplines of Conservation Biology:

Make a donation to Caribaea Initiative for this Giving Tuesday! Wed 20 Nov, 2019